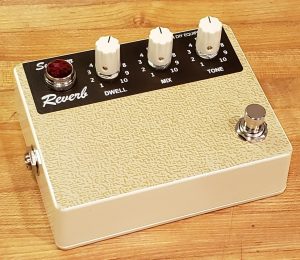 Summer Reverb DIY Pedal Kit from Austin Microphones.
You may know that I played in California surf bands for ~15 years. I hand-built my own Tube Spring Reverb units in the 1990’s before Fender reissued them. This is my affordable, modern tribute to those early Spring Reverb tanks – The “Summer Reverb” (A little bit later than the Spring Reverb!) A digital recreation of an outboard tube tank, with 3 simple control knobs, a classic red jewel indicator, and a truly vintage vibe. Also: >$600 less than a used reissue Tube Spring Reverb.

Digitally of course, so you won’t damage fragile wires like the old units, but it still oddly uncomfortable. The crashes are random, so you’ll never know quite what it will sound like… exactly like real Spring Reverb units. Video demo below.

The Summer Reverb is designed to add little grit when you hit it, just like the old tanks. The stomp switch sets the mix to DRY, leaving the reverb tails, and the ability to kick the tank when it is off. Again, just like the original. If you’re familiar with the operation of a spring tank, this is an easy transition.

My build instructions are simply AWESOME.

You’ve never built a project as clear and organized as this.  Install the parts from top-to bottom on the list, and follow-along with my Component Locator layout for exact positioning of every part and wire on the board, checking-off each component as you install it. It’s almost 100% visual assembly… There are more words on this page, than in the instructions!

Quality:
Neutrik input & output jacks are installed into the drilled, powder-coated, and UV-printed enclosure… NOT on the circuit board, so you won’t get intermittent or cracked connections after a few days of using it. Remember, it’s designed to be kicked, not strapped-down to a pedal board.

I’ve included a set of flush-cutters, and even a tiny screwdriver to tighten the set-screws on the knobs.
You’ll need wire strippers, solder, and a soldering iron, plus pliers (or my 3D Printed Turn-Ups, or metric sockets) to tighten the nuts on the jacks and switch, and a Philips screwdriver to install the base when you’re done.

Tech support is an email away, and comes directly to me.

Full Disclosure: There are no springs in this pedal: It is purely Digital. But over the course of a year of mostly staying home, I have discovered an uncommon way to tweak (or “bend”) the digital circuit to simulate the delay and drive of a mechanical spring tube circuit. It is not a smooth hall, or a plate, and it is not a perfect simulation (nothing truly is), but I think it’s pretty good.

An overview of the Summer Reverb, including CRASHES at 0:35!

Rick and Ryan review the Summer Reverb Pedal and other Austin Mics stuff.

The TarantinosNYC use the Summer Reverb LIVE on this song!

The Breakers tracked “Crystal Pistol” with a Summer Reverb! (Including a CRASH at 1:31!)